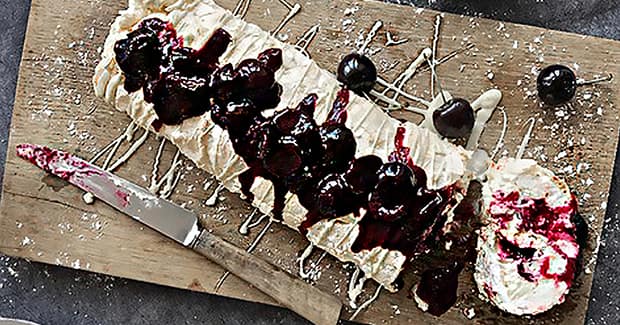 1. Line a swiss roll tin with parchment paper and preheat your oven to 160C
2. Fit the mixing bowl, splash guard and whisk tool to your Cooking Chef XL and add the eggs and cream of tartar
3. Zest and juice 1 orange.
4. Set to speed to 6 and whisk 40 seconds until you have soft peaks. With the machine still running pour in the caster sugar, increase speed to max and whisk for 3 minutes until you have stiff peaks.
5. Spread the meringue over the large parchment lined swiss roll tin and smooth out
6. Bake in the oven for 25 minutes until risen and golden and then set aside to cool
7. To your clean mixer bowl, attach the creaming beater.
8. Mix the cornflour with 2 tbsp of orange juice and then add this with the pitted cherries, Cointreau, orange zest, caster sugar, ground cloves, Star Anise and cinnamon stick to the bowl as well.
9. Set the temperature to 105 ºC and speed to SS1, then time to 10 minutes. Once done, turn off heat, continue to stir min speed for 2 minutes. Transfer to a separate bowl to cool
10. Cover the cooling meringue with a clean tea towel then turn it over on to the towel and remove the tin. Loosely roll up and leave to cool fully.
11. Next clean your mixer bowl and fit the whisk tool before adding the double cream, caster sugar and vanilla extract to the bowl.
12. Fit the bowl to your Cooking Chef XL, set speed to 3 and time to 1 minute until softly thickened. Be careful not to overwhip. Transfer to a clean bowl and set aside.
13. Fit your clean mixer bowl and the creaming beater then add the white chocolate.
Select the Chocolate melting pre-set, temperature 60, Speed SS1 and time 2 mins until melted
14. Next remove the parchment paper from meringue but leave the tea towel underneath
15. Remove the star anise and cinnamon stick from cooled the cherry sauce
16. Spread the cream filling over the meringue leaving a 3cm margin on the long edges. Next drizzle over 1/3 of the melted chocolate and then ½ the cherry sauce
17. Use the tea towel to roll up the roulade, lay it on a serve plate or board and drizzle with the remaining white chocolate and cherry sauce
18. Decorate with fresh cherries and orange zest and peel to serve.