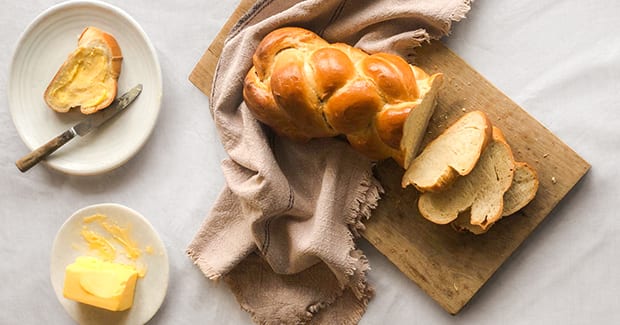 For the Poolish sponge:

1 - Begin by preparing the Poolish the night before you want to bake the bread. Add all of the ingredients to the bowl of your Multipro Sense Food Processor, fitted with the dough blade, and knead on medium speed for a minute. Remove the Poolish to a bowl, cover with clingfilm and set aside for an hour. After an hour, refrigerate overnight.
2 - The next morning, remove the Poolish from the fridge and rest for an hour to come to room temperature.
3 - Heat 210ml of the almond milk gently with the sugar and yeast until just warm. Gradually mix this into the Poolish.
4 - Add the remaining bread ingredients and the Poolish mixture to the large bowl of your Multipro Sense food processor, fitted with the dough blade and switch the machine on to minimum speed. Allow the machine to knead the dough for 10 minutes, until it is soft and elastic. It may be a little sticky, but this is fine.
5 - Remove the dough to a bowl, cover with a tea towel and leave to rise for 90 minutes.
6 - Remove the dough to a clean surface, divide it into four pieces and allow them to rest for 10 minutes. Take the first two pieces and roll each into a long sausage around 45cm long. Braid the two ropes together to make the traditional Zopf shape, and place onto a parchment lined baking sheet. Repeat with the other two pieces of dough, to form a second loaf.
In a small bowl, mix the remaining 2 tbsp almond milk with the maple syrup and turmeric and brush this mixture over the loaves.
7 - Preheat your oven to 200C.
8 - Leave the loaves to rise again for 30 minutes, then brush them again and bake in the preheated oven for 30 minutes, until the loaves are golden brown.
9 - To make the vegan butter, add the coconut oil to the small processor bowl of your Multipro Sense food processor, fitted with the knife blade. In a small bowl or glass, mix together the cider vinegar and almond milk. Add this to the processor bowl, along with the rest of the ingredients and process until smooth and fully incorporated.
10 - Remove to a bowl and refrigerate until ready to use.