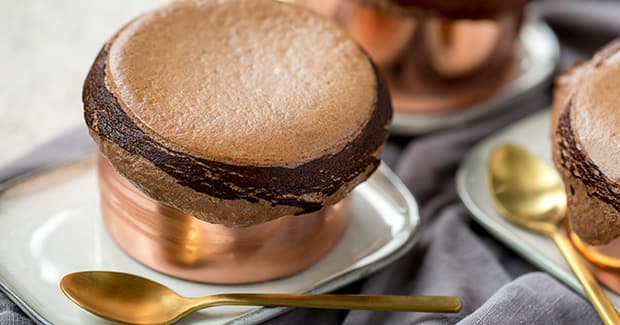 1. Begin by heating the milk to a simmer in a medium pan over a low heat.
2. Whilst the milk is heating, add the egg yolks and 150g of the sugar to the bowl of your kitchen machine, fitted with the balloon whisk and whisk together for 2 minutes on a medium low speed, until the sugar is dissolved and the mixture a little paler and thicker.
3. Add the flour, cornflour, cocoa and vanilla extract, and whisk again until the mixture is fully combined.
4. Once the milk is hot, add around one third of it to the mixture in the bowl, and whisk on minimum speed to combine, then add another third, whisk again on minimum speed, then finally repeat with the remainder of the milk.
5. Tip this mixture back into the milk pan and return to the heat, cooking gently and stirring all the time with a wooden spoon.
6. The mixture will thicken as it cooks, and after a few minutes should be becoming quite thick and shiny. Add this mixture back into the bowl of the machine and beat until smooth, to make sure you have no lumps. Reserve the soufflé base in a separate bowl until just before serving.
7. Preheat your oven to 190C.
8. Into the clean bowl of your kitchen machine, add the egg whites and cream of tartar. Attach the clean balloon whisk, and begin to whisk the eggs on a medium speed. Increase the speed and whisk on a high speed for around 2 minutes, or until the egg whites are making soft peaks. Decrease the speed of the machine to a medium low speed, and add a little of the remaining 150g of sugar at a time, until you have added it all. The mixture should still be making soft peaks, take care not to over whip the mixture.
9. Remove the egg whites to a separate bowl, and return the chocolate custard to the bowl of your kitchen machine.
10. Fit your machine with the fold tool, and add back one third of the egg whites to the bowl.
Set the machine to minimum speed, and fold in the egg whites to the custard. Once the mixture is combined, add another third of the egg whites, and fold in on minimum speed.
11. Finally repeat with the last remaining egg whites.
12. Spoon the mixture into generously buttered and cocoa dusted ramekins, run your nail around the edge of the ramekin, to help the soufflés lift, then bake in the preheated oven for 10-12 minutes, until tall and risen.
13. Remove from the oven and serve immediately.